Buffalo attorney Thomas E. Schofield had a love affair with the country of Canada that lasted most of his life.

He grew up in the Town of Massena, in St. Lawrence County, close to the Canadian border. Before going to law school, he graduated from the University of Toronto. He loved visiting Toronto, Ottawa and Niagara-on-the-Lake, which was just across Lake Ontario from his waterfront home in Youngstown. Many of his clients were Canadian corporations that did business in the United States.

Mr. Schofield’s most memorable moment in Canada came in July 2010, when he traveled to Toronto to meet Queen Elizabeth II and her entourage, during a royal visit to Ontario.

“Tom got to meet her because he was the lead organizer of festivities for the 200-year anniversary of the War of 1812,” recalled Richard A. Grimm III, Mr. Schofield’s longtime friend and law partner. “Tom loved Canada and was thrilled to meet the queen. He couldn’t stop talking about it and sharing pictures. We were all kidding him that the queen looked taller than he looked in the photos.”

He may have been short in physical stature, but friends in the Buffalo legal community called Mr. Schofield an intellectual giant. He died unexpectedly at his home at 71.

“Tom was literally a genius,” said Dr. Michael Merrill, a friend and client of Mr. Schofield’s.

“He was always thinking three steps past you, but he would listen with patience and kindness,” Merrill added. “Having him as a lawyer was like having a friendly giant on your side. You were confident things were going to turn out the best way.” 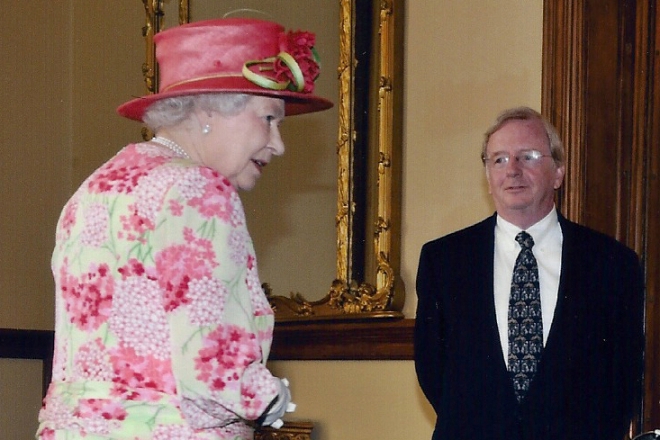 “Tom loved to read and discuss books. He devoured literature, science fiction and poetry,” Lannan said. “He had thousands of books, more books in his home than any person I’ve ever met.”

He was born in Plattsburgh and raised in Massena before going to the University of Toronto, where he graduated with honors in 1972.

He left that role in 2013 but continued as the firm’s senior counsel until his death.

Mr. Schofield’s legal practice was focused on the intricacies of cross-border business, a subject he taught at UB. He was also an expert in health care law and spent many years as chief outside counsel to Health Care Plan, now known as Univera.

He was a philanthropist who supported many non-profit organizations. He was an officer and director of the Healthy World Foundation, which has supported health initiatives for the poor in Uganda and India since 2006. He was a participant in and active supporter of Leadership Buffalo and served as chairman of the Niagara 1812 Legacy Council.

Mr. Schofield enjoyed studying history, political philosophy, architecture, music and theater. He was a supporter of the Shaw Festival and Irish Classical Theatre.

He enjoyed gardening and spending time with his two sons and his granddaughter.

He is survived by his wife, Janet Lindgren; sons Garth and Morgan; two sisters, Anne Duncan and Patricia Schofield; and a granddaughter.

A funeral service will be held at 11 a.m. Saturday in the Rhoney Funeral Home, 901 Cayuga Street, Lewiston.

Dan Herbeck– Dan Herbeck is an investigative reporter who has been at The Buffalo News for nearly 40 years. He is a graduate of Sweet Home High School, Erie County Community College and St. Bonaventure University. He and Lou Michel wrote a best-selling book in 2001 about Timothy McVeigh and the Oklahoma City bombing, "American Terrorist."
There are no comments - be the first to comment